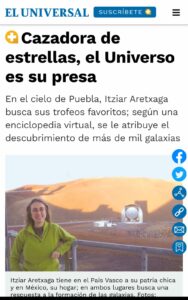 Puebla, Pue.- When the words “stars” and “galaxies” reach Itziar Aretxaga, her mind travels to the starry sky of Laga beach, on those summer nights with the wind in his face and the sound of the waves in his native Bilbao, in the north of Spain. “It is the emotion for the immensity that is the Universe, it was the other sea when I was on that beach,” says the 55-year-old astrophysicist, to whom Wikipedia attributes – much to her regret – the discovery of more than a thousand galaxies from the Large Millimeter Telescope “Alfonso Serrano”, the largest in the world.
The Basque Country is her little homeland and Mexico her home, in both places she seeks a scientific answer to the formation and evolution of galaxies and those humanly rooted questions: where do we come from and where are we going. “My interest is how the Universe has evolved, how galaxies have been able to evolve from the beginning of time to the way they look today around us,” she says, with a passion that overflows in her speech and in all her expressions. At the top of the Sierra Negra de Puebla volcano, at 4,600 meters above sea level, she enters the sea of ​​stars, the observable universe with its one hundred billion galaxies. And so, like a small grain of sand, she evokes a childhood with her mother Blanca, a dressmaker “for wealthy ladies” and her father José Ángel, a teacher in a professional school.
She, along with her cousins, is the first generation college graduate in the family. She specialized on Physics and Astrophysics, with hundreds of publications in specialized magazines around the world and is currently a member of the National Institute of Astrophysics, Optics and Electronics, the most important public research center belonging to the National Council of Science and Technology.

On the mountain, at that great telescope, when she analyzes the possibility of having found an uncatelogued galaxy, it is difficult for her to understand, her thinking is abstract, she contains the emotion and she does not allow herself to be touched in any way by that wonder that she sees. But when they verify the data, then she gets a cold sweat and she realizes that all this is real, that it is not a dream or an entelechy, it is not a product of her imagination: “it is an image of an astronomical object tens of billions of light years away ”.
Beyond counting and cataloguing the stars and galaxies, the objective – she describes – “is to be able to measure how they were formed (…) to try to put them in an evolutionary scheme in such a way that it gives us an idea of ​​how we come to have the galaxies around us “. When exploring the cosmos, Itziar allows herself to be overwhelmed by the great dimension, she feels smaller than a grain of dust, tiny compared to this great immensity of the Universe. “But at the same time I think that from our smallness how great is the scientific enterprise of humanity. From the little drop of dust called planet Earth and from our physical smallness as human beings, how we have been able to understand the greatness of the Universe ”.
The books in the corners of the house, the reading habit of her parents, those children’s microscopes in which she analyzed minerals and the soap that she made with her father in the kitchen, are memories that are still alive and that marked her, as well as her first doll and a motorized mini washing machine toy. “Clearly I had other types of entertaintment since I was little, I remember the scientific games: classification and structure of minerals, very simple chemistry experiments, from how to precipitate salt, to how to make soap,” she says.
Her walks through the mountains and rounds in bars in her town, accompanied part of the gradual process of her great curiosity for science, to understand the properties of matter and energy, to understand the laws that explained natural phenomena.“I always remember asking my father how things worked; at the end of primary school I knew that physics was what I liked and clearly in secondary school it was very clear that I was going to study physical sciences ”, she recalls.
The literature took her through unknown worlds, from the adventures of students fat the Torres de Malory boarding school in the saga of the British author Enid Blyton, through the humorous cartoons of Mortadelo and Filemón by the Spanish author Francisco Ibáñez, to immersing herself in a story of the future in The foundation of Isaac Asimov.
She obtained a Bachelor, Master and Doctorate in Physics in Spain and from there to the world and the Universe. She was trapped by stars, gas clouds, planets, cosmic dust, dark matter, and energy. Clusters of galaxies, active galactic nuclei, formation and evolution of galaxies and supernovae are the lines of research that led her to discover a thousand galaxies, according to Wikipedia. She blushes when they try to attribute such achievements to her. “Oh, I can’t count them”, she lets out with a shy smile and clarifies: “I have not discovered them alone, I have discovered them together with the scientific teams to which I belong.”
With simplicity and patience, as if explaining to a child who does not even know the word astrophysics, she relates that large scientific teams are formed to explore the extra-galactic sky and when they find new galaxies they enter catalogues. And so they have discovered thousands of galaxies, but – she affirms – if the interview is done in three more years, these will be hundreds of thousands, because there will be a new instrument that will be installed in the Large Millimeter Telescope. 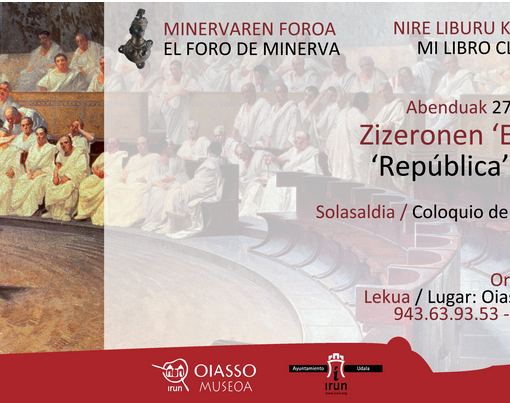 “The Republic” of Cicero, famous for its exposition of political theory, contains passages on the worldview, physics and astronomy of the time, […]

In 2022, the public society Itelazpi, of the Basque Government, included me in its calendar dedicated to pioneering women scientists. The artist  […]

What is the distribution of dusty material around the most massive black holes in the Universe? In this article of astronomy accepted […] 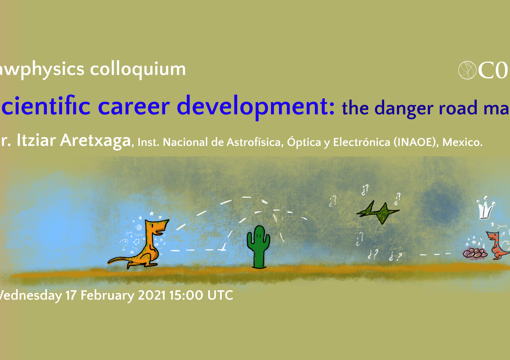